Thankful Thursday (Even Though it's Sunday)

I saw a post yesterday titled Thankful Thursday and got permission from Misty to "steal" her idea. But Thursday, Friday and Saturday all got away from me. Here it is Sunday, but I'm going to post this anyway.

Thursday was August 25th - my father-in-law's birthday. How thankful I am for him and the legacy he left. I see so many amazing traces of his legacy in my children. He was quite a man. He knew what he believed and he stood his ground no matter what the challenges. He was a loving, caring husband and father. In fact, as my mother-in-law grew more and more disoriented due to Alzheimer's, he faithfully and tenderly cared for her. Even though he had his own health issues, he pretty much laid down his life for his wife. (He's been gone now since 1999.)

He was fun-loving and that was something somewhat foreign to me when I married into the family. My introduction the first time my new husband and I stayed with my in-laws was to find a rubber snake in my suitcase. A day or two later, it was some plastic "barf." My husband and my children have tended toward the fun-loving side often to my dismay and occasionally to my utter terror!


My father-in-law was disciplined, a trait that showed up primarily in my middle son, although the others also have traces. My father-in-law used to brag about how he would take his last hot shower of the season on a specific date which never changed, by the way, no matter what the actual temperature. Then in the fall he had a specific date to start taking hot showers again. The lawn was mowed on schedule every 5 days whether it needed it or not. He kept impeccable records of everything, even the date and type of bread he made in his bread maker.


He also had the incredible ability to juggle several tasks at once. His job as an air traffic controller required it. Even at home he could listen to one game on the radio, have another on the TV and carry on a conversation at the same time. My daughter seems to have inherited this trait the strongest. How she manages to keep so many balls in the air at one time is a mystery to me! Her granddad's legacy?


My father-in-law, although he was a man of deep faith, was also somewhat of a worry wart. If he didn't hear from us within what he considered to be a reasonable amount of time, he would go so far as to write out a multiple choice, self-addressed, stamped postcard for us to return to him with an answer to mark; 1) someone is sick and dying 2) lost all my pens 3) we're ok, just haven't gotten around to writing! Having grown up in a family that cared for each other, but not quite so overwhelmingly, that sometimes annoyed me. Not anymore though. I came to understand that his family was more important to him than just about anything.

He was an excellent provider. He was frugal and careful and a hard worker. Thanks to his careful planning, his wife has never lacked and was able to volunteer for an organization she truly cared about. That was a great joy to her. Even now with Alzheimer's, she is completely cared for. This trait was passed on to my youngest son - frugal to a fault, not afraid of hard work (but that goes for my husband and all my children) and very careful in his expenditures.

My father-in-law was also generous. He gave liberally to his church and to many missionaries both financially and by giving his time. He visited the sick and those in nursing homes, wrote caring notes to many who needed encouragement, cared for his neighbors and their homes when needed and generally was helpful to anyone and everyone. We were frequently on the receiving end of his generosity. And all of my children are generous with what they have. They too, were receivers of his generosity.

So yes, I'm thankful for a loving, caring, wonderful father-in-law.
Posted by Sharon Reece at 11:51 AM 6 comments:


Unlike most American families, we almost always have dinner and sometimes even lunch together as a family. Lately we've taken to doing a Sunday morning brunch since our church meets on Wednesday evenings and not on Sundays. That has turned out to be one of the best family times. We're all relaxed and not in a hurry to go anywhere. Plus we're not exhausted from a day of work. It's just fun to sit around over brunch and talk about whatever happens to be on our minds. Usually that involves planning in some form or another. (Want to know what we've been planning?)

The menu often revolves around buttermilk waffles from a recipe in an old Amish cookbook we picked up somewhere. We add eggs or bacon or sausage to the menu, some juice and our special Brazilian coffee. Occasionally we opt for pancakes or french toast as the central part of the meal. A couple of weeks ago I was in a very energetic mood and since we still had fresh blueberries from a pick-your-own farm, I decided to make blueberry crepes. Mind you, I made that decision before looking at a recipe or I probably would have changed my mind. But I had already made the announcement and the whole family was expecting blueberry crepes. So here is the result along with glowing rave reviews and "You can do that again's." 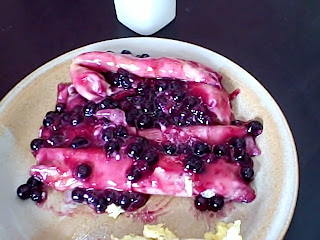 Unfortunately, the blueberry season is over for this year. We have a few in the freezer for special occasions, but we're all already looking forward to next year's blueberry season! I'll probably indulge my family again by treating them to blueberry crepes!
Posted by Sharon Reece at 4:30 PM 4 comments:

Do you ever feel overwhelmed? I videoed this crazy chicken recently and just got to thinking this morning that often I'm a little bit like her and could probably pause and learn a lesson. Here she is trying to incubate 69 eggs! An average hen can handle about a dozen eggs, some can handle a few more or a few less.

So I got to thinking. Hmm... Maybe I'm a little too much like this hen with a few too many projects and passions on my "plate." In my zeal to accomplish much, too often little is really accomplished. I hate to admit it, but maybe I need to learn a lesson from this hen and concentrate on doing just a few things really well.

Now for the stickler! How do I choose? God's help and guidance is the obvious answer. Perhaps there is another lesson the hen can teach me. If I only had 3 weeks left in my life (about the time it takes to hatch out a batch of chicks) how would I spend my time. Aha! There is a key - although I doubt I could accomplish all I want to in just three short weeks.

I would definitely love my loved ones more passionately - and I would write furiously in an attempt to get everything down in print before my demise. And I would try for all I'm worth to bring more people into God's Kingdom. That's what my writing is all about anyway.

I'm sure there are more things I could learn from this crazy hen, but I think I'll mull that over for awhile! Don't you just wonder what must have gone through her mind?

What do you think? Is there a lesson here for you? Please share if you will.