"J" is for John Cameron Reece born in 1977 in Grand Prairie, Texas, the only one of our three children not born in Brazil. He disappeared in the Kohala Mountains on the Big Island of Hawaii in 1999 after leaving to go on a hike on Thanksgiving Day.


John in the lab at Wheaton College 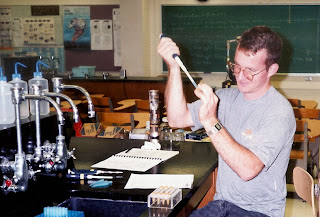 Rick Reece photo (all rights reserved)
What can I say about John? He was a young man of integrity, self-discipline, uprightness. He was kind and thoughtful and passionately loyal to his friends. But the characteristic that stands out most was his passionate love for the Lord Jesus Christ and his burning desire to share that relationship and hope and love with those around him.

He was an avid reader but avoided "junk" books. He read mainly the kind of books you would find on a list of recommended reading for college bound students. And he read his Bible - probably the only book he took with him on his fateful hike.

Orchids and tropical fish were his primary hobbies. Wherever he went he would set up an aquarium. In Brazil, he and his father built a huge aquarium and he stocked it with tropical fish from the stream just down the road from where we lived. Even in college he had an aquarium in his room. His love for orchids began when he was 10 years old. He read the whole Time Life book on Orchids from cover to cover and then proceeded to become an orchid collector and expert.

Here is an entry from his journal written in Hawaii about orchids:

"There is a particular orchid that grows everywhere around here. There are apparently only 3 native Hawaiian orchids, and 4 non-native species that have gone wild. The one I’ve been seeing is terrestrial, has white flowers with purple lip, and grows about 1 m. high. I think it is an introduced species."

John loved everything about God's creation. Here is another excerpt from his journal about what he observed in Hawaii:

"Yesterday I rode around Crater Rim Drive right nearby here. Some of the craters are huge, and there are a lot of steam vents and the smell of sulphur and everything. The road goes over several recent lava flows, the most recent being 1982 if I remember correctly. It’s amazingly desolate riding over a lava flow, where all you can see is sharp black rock everywhere.

"From what I’ve seen so far, this has to be the most amazing place I’ve ever lived. There’s rainforest, mesa and dry forest all within biking distance, craters with recent lava flows and steam vents nearby, mountains in the distance on clear days, and a perfect sky on clear nights."

The most amazing gift John gave us was his journal, written from 1995 to 1999, the last entry written just 6 days before his hike. It gave us something tangible, something that revealed what he was thinking and how he processed the circumstances and events around him. We have edited it and call it John's Legacy. We plan to make it available as an e-book on Kindle - we'll let you know when.

John's legacy to us was the privilege and honor of being parents to a deep, thoughtful and creative thinker. Although he was generally quiet, he wasn't afraid to express what he truly thought. We always asked his opinion before making a decision and he always asked ours. He was not only our son, but our friend. We may be slightly biased, but he was a godly example to us in so many ways. You can read more about John and about our search for him in our book, Aloha is Forever.

Do you know any young people who are an example to you?
Posted by Sharon Reece at 1:00 AM

Email ThisBlogThis!Share to TwitterShare to FacebookShare to Pinterest
Labels: A to Z Challenge, Aloha is Forever, John Reece, John's Legacy

Thank you for sharing your thoughts.